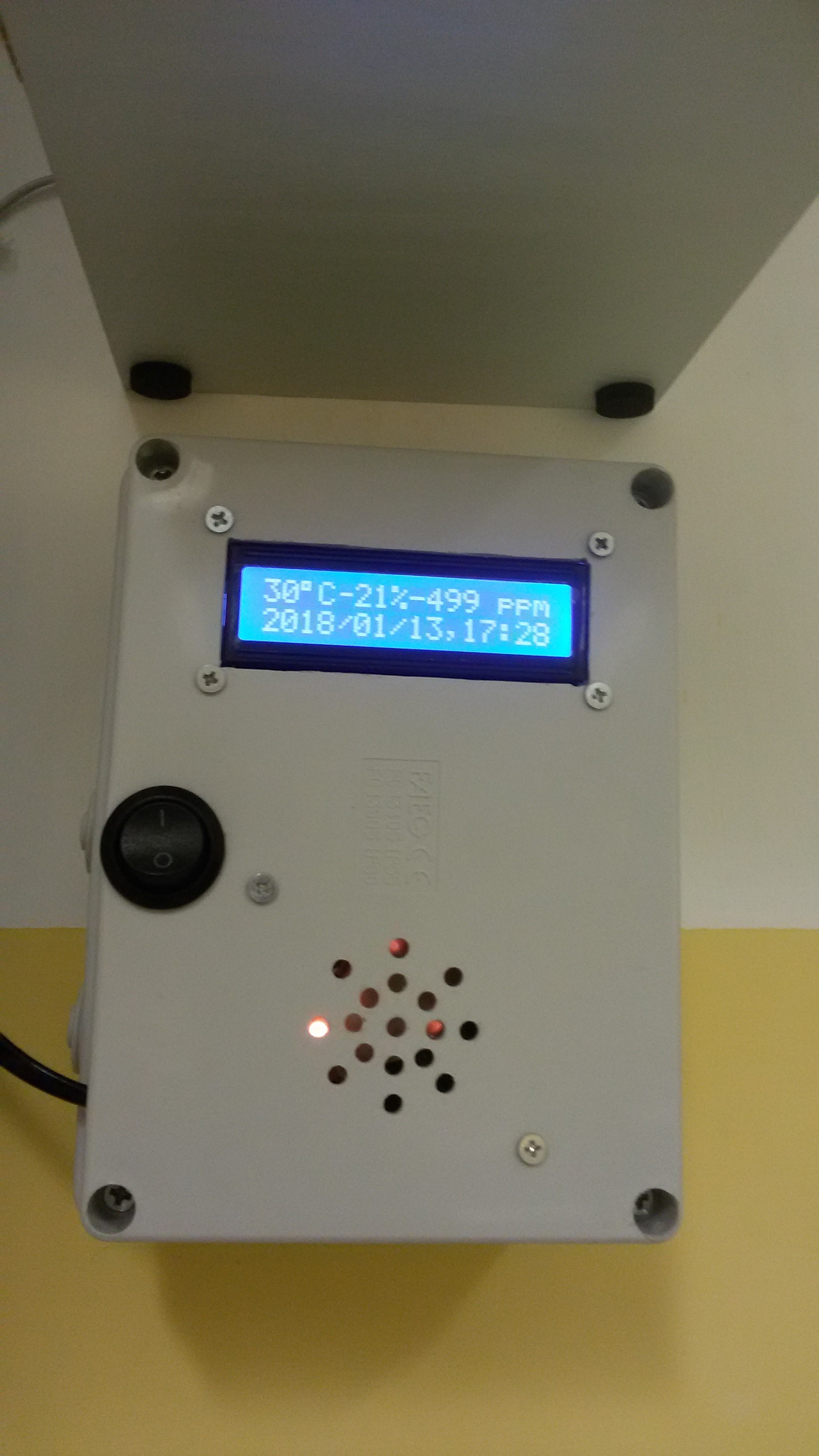 A control unit for monitoring CO2 is installed inside a classroom of IIS Valdichiana.The control unit will provide data on: temperature; Humidity and Carbon dioxide values (CO2 ppm - parts per million). After this first step, will be a calibration phase of the sensor and of the components, aimed to obtaining congruent data. Teodor Ariton and Michele Sacco are working on it 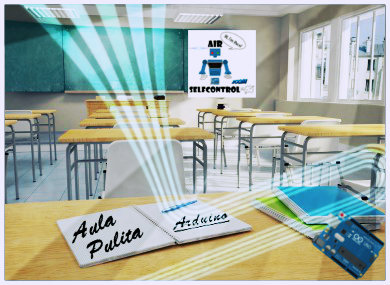 The "aulapulita" project takes its first steps during the participation process called the Laboratorio Ambiente (2014-2015): in fact the debate on the decrease concentration and productivity beyond a certain CO2 threshold started during laboratory sessions dedicated to learn the use of the Arduino microcontroller and during some events open to all citizens.
The first phase of experimentation is performed by Alessandro and Leonardo Fedi, they was participants of the project, who hypothesize the use of the MQ135 sensor: this specific sensor, it is low cost and had been illustrated in some laboratory sessions. But after an initial experimentation phase, emerges that the MQ135 sensor requires long warm-up time and it has measurement limits that are too low to allow measurements that are appropriate for this purpose.
After the first tests carried out by some participants in the participation process Laboratorio Ambiente, the project gains considerable momentum thanks to the contribution of Marco Lombardi: he had the intuition to use the sensor K30 of the Senseair; the problems concerning calibration and warm-up time are thus solved.
Marco illustrates in this way the new phase: the project concerning "the realization of an inexpensive kit that is simple to explain and to assemble. It remains a modular project with primarily educational value, but also operational. The modules are essentially two: the creation of a detection point that can work alone with data collection on external memory, but with the possibility of being put on the network (second module) because in case of multiple points of detection these can be communicated and then processed in a school computer designed for the purpose ".

The first module is designed to function autonomously respect to the second module. Now, let's see in detail the components necessary for the realization of the first module:

- Arduino ONE or compatible;
- RTC shield: to have a temporal reference on the acquired data;
- MicroSD shield: to save the data acquired on files in CSV format;
- I2C 16 × 2 LCD module: to view the acquired data and any sensor failures in real time;
- K30 Senseair CO2 sensor;
- DHT22 sensor: for monitoring temperature and relative humidity;
- Buzzer: for the acoustic alarm for exceeding the threshold;
- 2x LED: to report any sensor failures;
- 1x dip switch 2 channels: to set the CO2 alarm threshold;
- 12v power supply;
- Wires and breadbord: for connections.

Hey There, let's talk about the purpose of this amazing project!

The 'Air Selfcontrol' participation project starts from the situation in the Chiusi municipality. The few advanced technology companies can represent the lever for a new development based on the "industry 4.0." Such  strategy needs a drastic updating of the training processes not provided by school programmes.
The project is inspired by a previous one called  "Laboratorio Ambiente" and funded by the Authority for public participation of Tuscany Region. Laboratorio Ambiente has shown the potential and viability of a citizen science strategy, based on sophisticated low cost equipment.
Monitoring applications of environmental variables provide a sufficiently complex application field for training and awareness on both environmental problems and advanced technological training.
As regards the strengthening of environmental sensitivity, the territory of Chiusi is particularly suitable for its environmental and cultural heritage. The two networks  (inside the school and outside in the town) allows the development of technical skills and ability to relate to community projects.
Finally, this project is a first step for a local "junior science shop". If the traditional science shop from the 70s has seen the collaboration between the environmental action groups and the universities, the access to equipment at low and very low cost, could allow the development  forms of collaboration between environmental action and local technical and vocational high schools.
The projecy is open to collaboration with international initiatives.

The first part of the airselfcontrol project, the one concerning the introduction to the use of Arduino microcontroller, has ended. It was a 10-hour course that allowed not only to enable attending students to use this powerful tool, but also to show the possible connections with the airselfcontrol project. The second and the third part will require the participation of experts to assemble the detection units and finally their installations.
The Arduino course is the fourth of a series started in 2014 within the project “Laboratorio Ambiente” similarly supported by the Participation Authority of the Tuscany Region. Subsequent other two courses were organised and financed by the InnovazioneLocale society. The course format has progressed in time through innovations and reached a solid structure. In order to introduce the flipped class teaching approach videos have been produced and made universally available through the InnovazioneLocale site. In the past three years many have contributed like Luca Truffarelli of Magione Tinker Garage who tought the first course and subsequently provided useful advice. Teodor Ariton was the main teacher. Useful contributions have come by Fosco Taccini, Artemio Mariotti, Alessandro Fedi, Carlo Giulietti, Marco Lombardi e many others. Michele Sacco mounted the videos. Francesco Storelli lent his voice for the audio.
The courses took place in the local vocational high school and students were for about 50% from the school and the rest by external interested students.